Congress 'All Black Protest': Indian democracy must be protected, says Rahul Gandhi after being detained

Right outside the gate of Parliament, police had placed heavy barricading to stop the lawmakers, who staged a protest there. Several MPs, including Rahul Gandhi, were detained. Read more on Dynamite News: 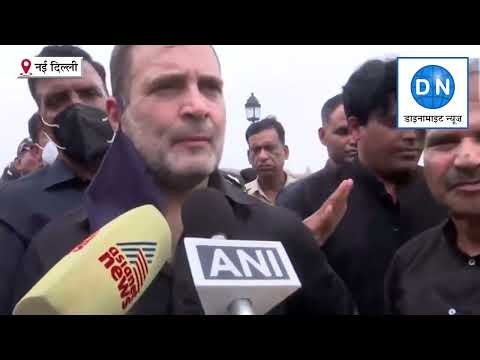 New Delhi: Congress MPs on Friday staged a protest march from the Parliament and attempted to go to Rashtrapati Bhawan, but were stopped at Vijay Chowk meters away from the Sansad Bhawan. There after several MPs were detained by the Police.

Congress is staging a nationwide protest against inflation. MPs raised the issue of GST and price rise in both Houses of Parliament, and both Lok Sabha and Rajya Sabha were adjourned till noon.

As Congress leaders gathered at Gate No 1 of Parliament, Sonia Gandhi led the MPs as they raised slogans. Congress MPs then started marching outside the Parliament complex fot the president's house to handover a memorandum to President Droupadi Murmu.

Right outside the gate of Parliament, police had placed heavy barricading to stop the lawmakers, who staged a protest there. Several MPs, including Rahul Gandhi, were detained.

"Democracy is being killed," said Rahul Gandhi as Media jostled to get his comment as he was being taken by the police.

Asked about the police blocking them and manhandling the MPs, the Congress leader said, "We are MPs,... I'm happy to be manhandled. Our job is to resist these forces, make sure Indian democracy is protected, raise the issues of people and we are doing that.

"We are standing here, the police are not allowing us to go ahead. They have dragged our MPs and detained them, some have also been beaten up. We are talking about inflation and unemployment. We are not being allowed to go forward," he said.

Protest is also being held at the Congress headquarters, where Priyanka Gandhi is leading the front. The party has planned nation-wide protests on the day. (with UNI inputs)