TV actress Nishi Singh, best known for her role in 'Qubool Hai', is no more. Read more on Dynamite News:

Nishi Singh, who acted in shows like 'Tenali Rama' and 'Hitler Didi', died on Sunday, September 18, after a long illness that stretched on for over three years. 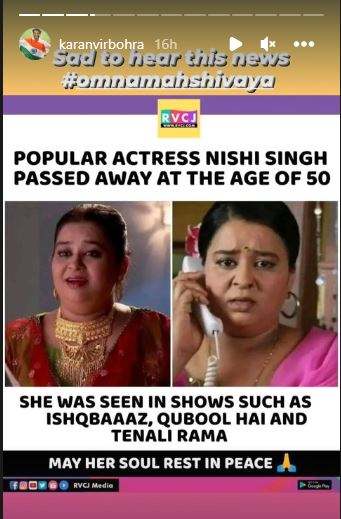 Nishi, reportedly, suffered three strokes of paralysis over the last few years and was battling with resulting health woes. Sanjay, who is a writer-actor by profession, had asked for financial help in September 2020 after Nishi suffered a paralytic attack in February 2019, and another one in February 2020.

Read also: Akhilesh Yadav takes out march with party MLAs against UP govt in Lucknow

CINTAA expresses its condolences on the demise of Nishi Singh pic.twitter.com/2kBCBFxKHh

Nishi Singh is survived by husband Sanjay and their two children, a 21-year-old son, and an 18-year-old daughter. (ANI)

Krystle D'souza to make her Bollywood debut with 'Chehre'