Supermodel Hailey Bieber is "absolutely heartbroken for everyone involved" in the accidental shooting on the set of the upcoming movie 'Rust', which led to the untimely demise of cinematographer Halyna Hutchins.

Washington [US]: Supermodel Hailey Bieber is "absolutely heartbroken for everyone involved" in the accidental shooting on the set of the upcoming movie 'Rust', which led to the untimely demise of cinematographer Halyna Hutchins. The 24-year-old niece of actor Alec Baldwin, 'Rust' star and producer, offered her condolences to those impacted by the tragedy, which left the cinematographer dead and director Joel Souza injured.

"Sending all my love to the family of Halyna Hutchins. This is a truly unimaginable and devastating tragedy," Hailey wrote on her Instagram Story on Saturday. "My thoughts are also with Joel Souza as he recovers. I am absolutely heartbroken for everyone involved," she added. 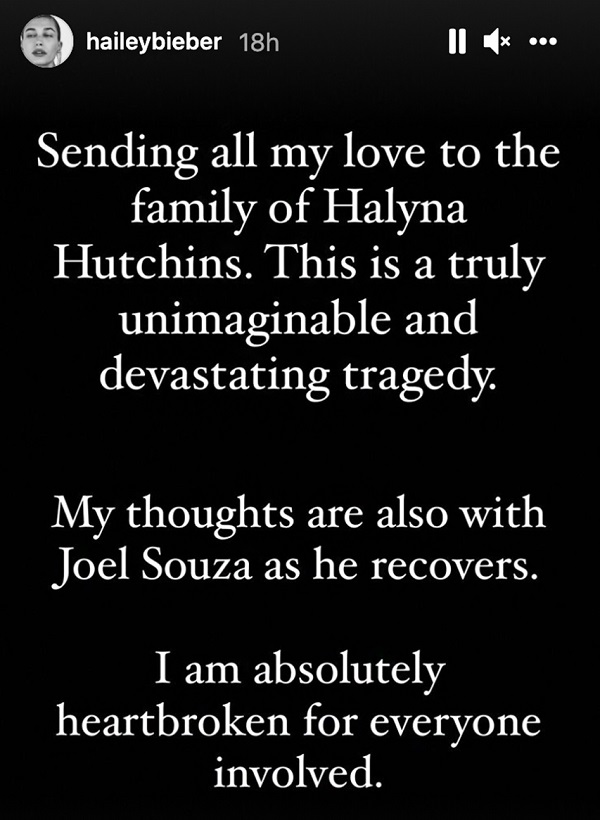 On Thursday, Hutchins and Souza were "shot when a prop firearm was discharged" by Baldwin, according to the local sheriff's department. The film was shooting at the Bonanza Creek Ranch set in New Mexico, reported People magazine. Hutchins was airlifted to the University of New Mexico Hospital, where she died from her injuries. Souza was treated for his injuries at Christus St. Vincent Regional Medical Center in Santa Fe and was released on Friday.

According to an affidavit filed by the Santa Fe County Sheriff's Office, Baldwin was told the prop firearm was safe when it was handed to him by an assistant director, who didn't know there were live rounds in the weapon, reported The Hollywood Reporter. When Baldwin pulled the trigger, the live projectile struck and killed Hutchins and injured Souza, the sheriff's office said in the filing. No charges have been filed and the investigation is still ongoing.
On Saturday evening in New Mexico, the International Alliance of Theatrical Stage Employees (IATSE), of which Hutchins was a member, held a candlelight vigil at Albuquerque Civic Plaza in her memory. (ANI)