Kohli had played a knock of 136 against Bangladesh in the day-night Test at Eden Gardens and this enabled him to reach 928 points.

Meanwhile, Smith managed to score just 36 runs against Pakistan at Adelaide and as a result, the batsman saw his points dropping from 931 to 923.

Also Read: I too get affected by failures- Virat Kohli

Kohli now has an eight-point lead over Smith, but India skipper would not be able to improve his points as the side is not scheduled to play a Test match this year.

While Smith has a chance of improving his ranking as Australia will play two more Test matches against New Zealand this year. 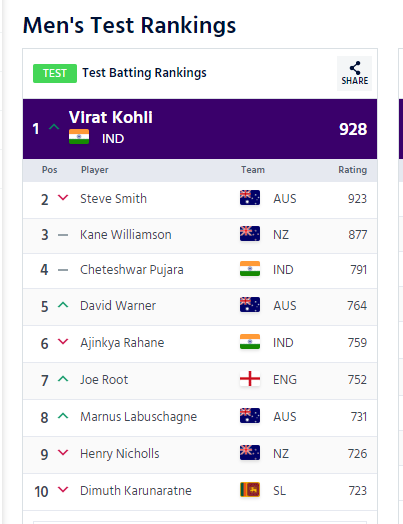 Australia opener David Warner's knock of 335 not out has lifted him 12 places to the fifth position while Marnus Labuschagne is in the top ten for the first time after being ranked as low as 110th at the start of the year, the latest rankings revealed.

Pacer Mitchell Starc has also moved four places to the 14th spot after taking seven wickets against Pakistan at Adelaide.

Pakistan's Babar Azam has moved two places to the 13th spot after playing a knock of 97 against Australia in the second Test.

England skipper Joe Root played a 226-run knock against New Zealand and as a result, he has entered top ten. He is currently placed at the seventh position. (ANI)

Sports: Why Shreyas Iyer compares Virat Kohli with a lion?