Kerala Chief Minister Pinarayi Vijayan convened a meeting with BJP-RSS leaders in the state against the backdrop of the recent political violence and slaying of an RSS worker.

Thiruvananthapuram: Kerala Chief Minister Pinarayi Vijayan on Monday convened a meeting with BJP-RSS leaders in the state against the backdrop of the recent political violence and slaying of an RSS worker.

CPI(M) state secretary Kodiyeri Balakrishnan is also at the meeting.

As the chief minister arrived at the venue of the meeting, a group of television personnel who were present to take video footage before commencement of the meeting, were asked by Vijayan to leave.

Kerala Governor P Sathasivam had summoned the chief minister and DGP Loknath Behara over the incident, on Sunday.

The chief minister had assured him that he would be meeting BJP and RSS state leaders.

Vijayan and the DGP met the governor separately after they were summoned by the Raj Bhavan to ascertain the action taken following recent violent incidents including the murder of the 34-year-old Rajesh on July 29.

The state had been witnessing a series of violent incidents allegedly involving BJP-RSS and CPI-M workers with the capital district rocked by incidents of attacks on houses of rival partymen in the past few days.

The state BJP office was vandalised on July 28 while stones were thrown at the house of CPI(M) state secretary Kodiyeri Balakrishnan's son Bineesh Kodiyeri.

Rajesh was hacked to death by a history-sheeter-led gang here on Saturday. His left arm was chopped off and there were several injuries all over his body.

Police had said seven persons, including prime accused Manikandan, the history-sheeter, have been arrested in connection with the killing of the RSS workers.

They said the attack was due to personal enmity between Manikandan and the victim for the last one-and-half years.

On Sunday, Union Home Minister Rajnath Singh spoke to the chief minister and voiced concern over attacks on political workers in Kerala and said political violence was unacceptable in a democracy. 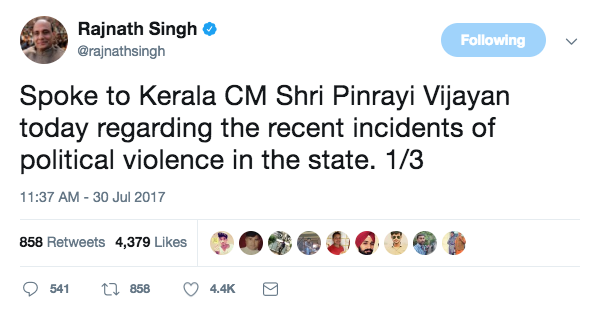 While BJP state president Kummanam Rajasekharan alleged that the CPI(M) was behind the attack, the CPI(M) district leadership has denied any role of the party in the attack.

CPI(M) state Secretary Kodiyeri Balakrishnan has said the RSS worker's killing was a fallout of individual rivalry and his party had nothing to do with it.

However, Rajasekharan, has alleged that the ruling CPI-M was trying to eliminate its political opponents and urged it to refrain from violence.

The opposition Congress observed fast in Kozhikode to protest against the politics of violence. (PTI)