Karnataka Speaker K R Ramesh Kumar on Thursday sought a detailed report from Home Minister M B Patil on rebel Congress MLA Shrimant Patil, who was admitted to a hospital in Mumbai after he complained of chest pain on Wednesday.


Bengaluru: Karnataka Speaker K R Ramesh Kumar on Thursday sought a detailed report from Home Minister M B Patil on rebel Congress MLA Shrimant Patil, who was admitted to a hospital in Mumbai after he complained of chest pain on Wednesday.

Expressing concern over the images shared in the House, Kumar observed that the situation "does not look natural".

"What kind of a Speaker I would be if I proceed with this document (letter sent by Congress MLA Shrimant Patil informing about his ill health) which has no date or letterhead," Kumar said in the Assembly. 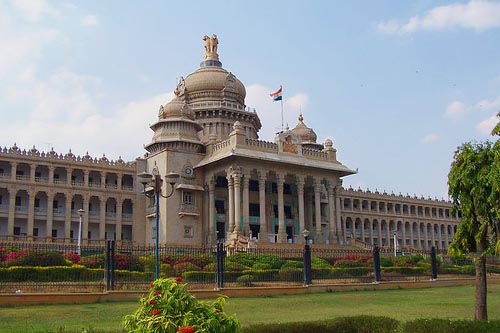 "Please contact the family members of Shrimant Patil (Congress MLA) immediately. Give a detailed report to me by tomorrow.  Ask them if they know anything about this.  Has he had a medical problem in the past or is it the first time. it does not look natural. If Home Minister can't ensure protection, I will talk to DGP," he said adding was there no hospital in Bengaluru for treatment.

Shrimant Patil, who was staying with other Congress legislators at the Windflower Prakruthi Resort in Bengaluru, was admitted to a hospital in Mumbai today.

Water Resources Minister D K Shivakumar displayed photos of Patil on a stretcher.  He also sought to know the whereabouts eight MLAs who travelled together.

"There were 8 MLAs who travelled together. Here is a picture of one of them (Shrimant Patil) lying inert on a stretcher, where are these people? I'm asking the Speaker to protect our MLAs," Shivakumar said. After the Congress leader's statement, furore erupted in the Assembly. Karnataka Congress President Dinesh Gundu Rao said it is part of a "conspiracy" hatched by the BJP that Patil was flown to Chennai and then to Mumbai.

"There was a hospital right next to the resort where our MLAs are staying. Then why was he (MLA Shrimant Patil) flown to Chennai and then to Mumbai for treatment? He is healthy, nothing is wrong with him. It's a conspiracy by BJP," he said.

The Assembly was debating a confidence motion moved by Chief Minister HD Kumaraswamy that came in the wake of several resignations submitted by Congress-JD(S) MLAs.  The House was adjourned for half an hour following the uproar.As per the register of attendance, 18 MLAs were not present in the Assembly as the House took up the vote of confidence for debate.

Kumaraswamy had on Wednesday issued a whip to all JD(S) MLAs including three rebel legislators Narayan Gowda, Gopalaiah and H Vishwanath to be present in the Assembly at the time of trust vote.The Congress had issued a similar whip to its members including the rebels to attend the House (ANI)