On hearing the gunshot the family raised alarm and before the accused could flee, neighbours had surrounded the house. Full Story.. 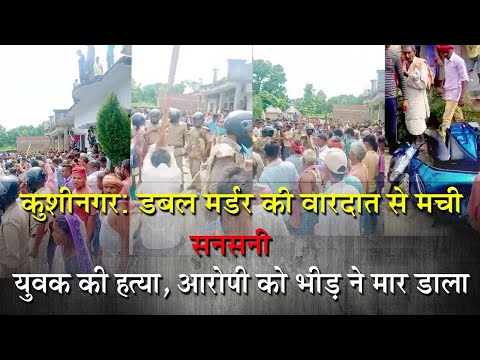 Kushinagar (Uttar Pradesh) : A man was beaten to death by a mob in a village in Uttar Pradesh's Kushinagar district after he allegedly shot dead a person at the latter's residence on Monday.

According to police, the incident took place around 8.00 am on Monday when the accused Aryaman Yadav went to Sudhir Kumar Singh's house in a village in Kushinagar and introduced himself as Sudhir's elder brother.

"At the time Sudhir was in the washroom and he was asked to sit down and was served tea. When Sudhir came out of the washroom, the accused took out a pistol and fired on him," Vinod Kumar Mishra, Superintendent of Police (SP) of Kushinagar said.

Mishra said that on hearing the gunshot the family raised alarm and before the accused could flee, neighbours had surrounded the house.

"To escape the crowd, the man again went inside the house and climbed on to its terrace from where he started firing in the air," Mishra said.

The senior police official said that somebody in the crowd called the police, which reached the spot and asked the accused to surrender.

"The accused fired on the police and the police returned the fire. He later again went down and locked himself in a room in Sudhir's house. But, by the time police could reach and arrest him, the crowd went in the house, broke the door of the room, and thrashed the accused man to death," Mishra said.

He added that further investigation in the case is underway. (ANI)