The death toll in a building collapse in south Mumbai's congested Dongri locality has risen to 14, the NDRF said on Wednesday, even as rescue and search operation from the rubble was still on.

Mumbai: The death toll in a building collapse in south Mumbai's congested Dongri locality has risen to 14, the NDRF said on Wednesday, even as rescue and search operation from the rubble was still on.

"So far, 13 people, including six males, four females and three children have been declared dead, while nine have got injuries and getting medical treatment," Sachidanand Gawde, the PRO of the National Disaster Response Force (NDRF) battalion said. Gawde said the search and rescue operations continued the whole night and was still on.

"It (search and rescue operations) will go on till the last piece of rubble is not removed from the spot," he said. 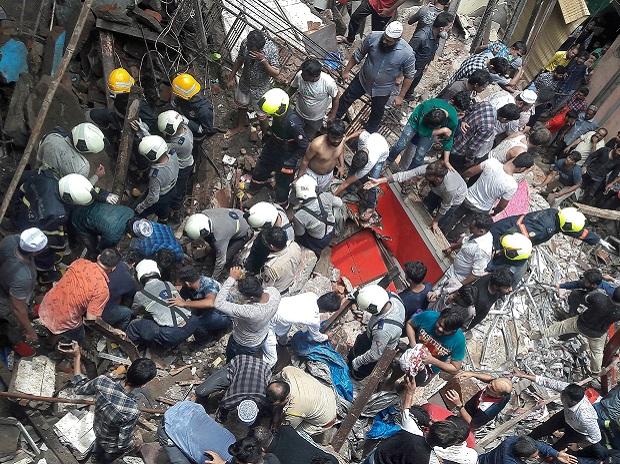 The official said his team members had been told that there were few customers at an eatery situated in the ground floor and no one knew the exact numbers. "So our job is still left to rescue those men," he said.

In a statement, Mumbai fire brigade chief P S Rahangdale said two kids -- one aged between six-eight and the other aged about four -- were rescued from under the debris by the fire fighters.

"Both kids were sent to Sir JJ hospital in 108 Ambulance, but they were declared dead," Rahangdale said, adding one fireman was also injured in the line of duty.

Mumbai police has made lightning arrangements to carry out rescue operation in night. It has so far registered an ADR into the mishap and will launch a detailed inquiry. An official from the BMC disaster management cell said three more bodies had been recovered early on Wednesday morning and had been sent to nearby hospital, and awaiting doctors report about them.

"The death toll likely to up further," he said.

The state government, has so far not announced compensation to the victims. Local MLA Amin Patel will meet Chief minister Devendra Fadnavis in the afternoon to demand a hefty compensation and speedy rehabilitation for the victims. (PTI)