PM Narendra Modi addresses the gathering at inauguration ceremony of the Kochi Metro.

Kochi: Prime Minister Narendra Modi addresses the gathering at inauguration ceremony of the Kochi Metro and said that Over the last three years, my Government has placed special focus on overall infrastructure development of the nation.

Addressing the inaugural function, he stressed the need to bring about a paradigm shift in urban planning by adopting a people-centric approach and integrating land use and transport.

"Over the last three years, my government has placed special focus on overall infrastructural development of the nation," Modi said.

"In Pragati meetings, I have personally reviewed nearly 175 projects worth more than Rs 8 lakh crore and resolved bottlenecks," he said, referring to his ambitious multi- purpose and multi-modal platform PRAGATI (Pro-Active Governance And Timely Implementation).

Modi said his government was also focussing on next generation infrastructure, which includes logistics, digital and gas.

The prime minister, who began his speech in Malayalam, said he was happy to be part of the inauguration of the Kochi Metro.

"I congratulate the people of Kochi on the proud moment," he said.

Kochi, the queen of the Arabian Sea, was once an important spice trading centre. Today it was known as commercial capital of Kerala, the prime minister said.

Kochi Metro Rail Limited (KMRL) is a 50-50 joint venture of the Centre and the state government.

The Centre has so far released over Rs 2,000 crore for the project. The coaches reflected 'Make in India' vision.

They have been built by Alstom near Chennai and have an Indian component of around 70 per cent, he said.

In a tweet shortly after he completed a ride in the Metro, Modi said that it was a "futuristic infrastructure that will contribute to India's growth".

Considered the fastest completed metro project in the country, Kochi Metro, the flagship transportation infrastructure project of Kerala, will start its regular operations from June 19. 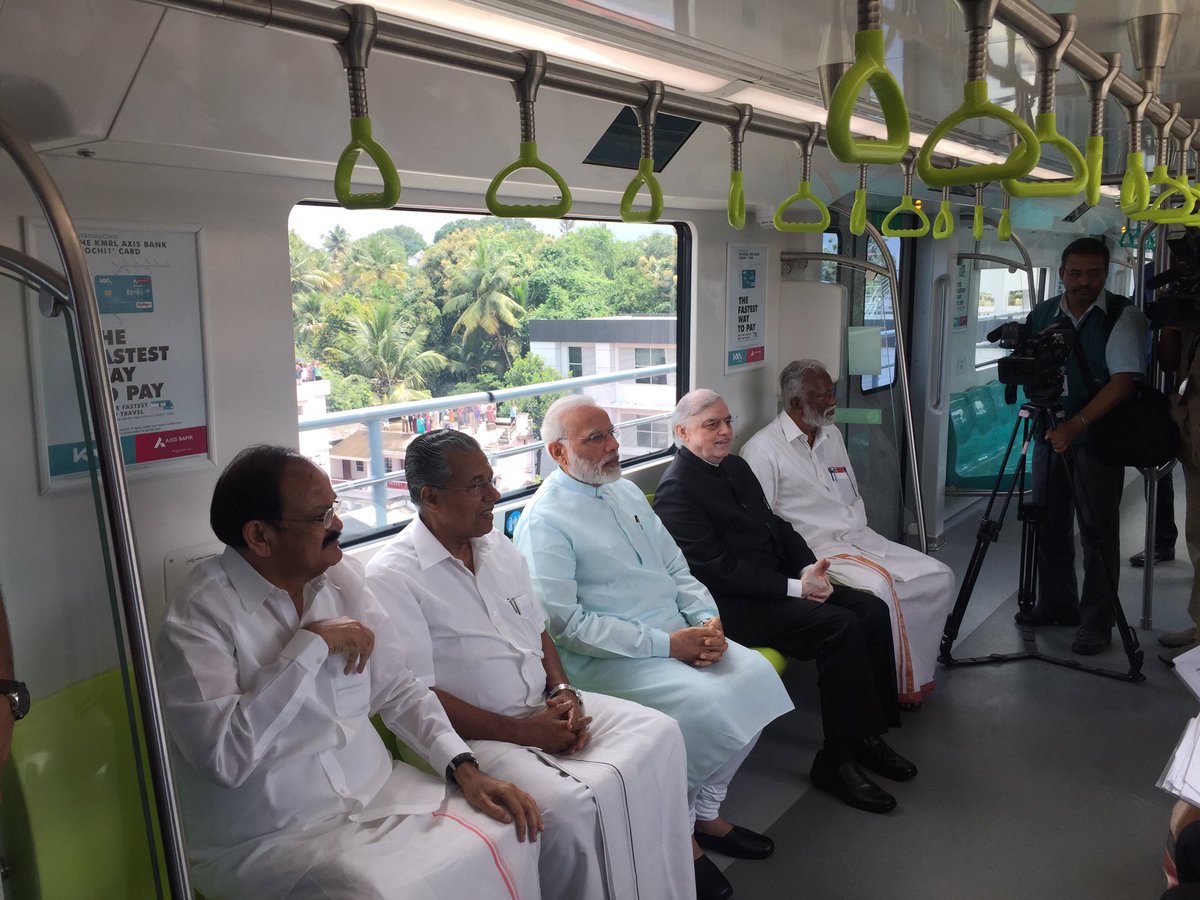 Then Prime Minister Manmohan Singh had laid the foundation of the project on September 13, 2012 and the construction began in June, 2013 during the tenure of the previous Congress-led UDF government headed by Oommen Chandy, who was conspicuous by his absence today.

The estimated completion cost of the Kochi Metro is Rs 5,181.79 crore.

The new transport system is expected to enhance the quality of life for the Greater Kochi metro area by improving regional connectivity and reducing overcrowding, traffic congestion. (PTI)