Tiger Shroff unveils his first look from next single 'Casanova'

Bollywood actor Tiger Shroff on Wednesday treated his fans to the first look of his upcoming second single 'Casanova'.

The 'Baaghi' actor took to Instagram to share a reel video giving a glimpse of his ripped body in the song. He is seen donning a dashing pair of radiant sunglasses with a shirtless black tuxedo suit and a metal funky pendant in his neck.

The 30-year-old actor who has reconceptualised action in Bollywood has been launching his second single after the success of his debut song 'Unbelievable', which he released in September 2020. 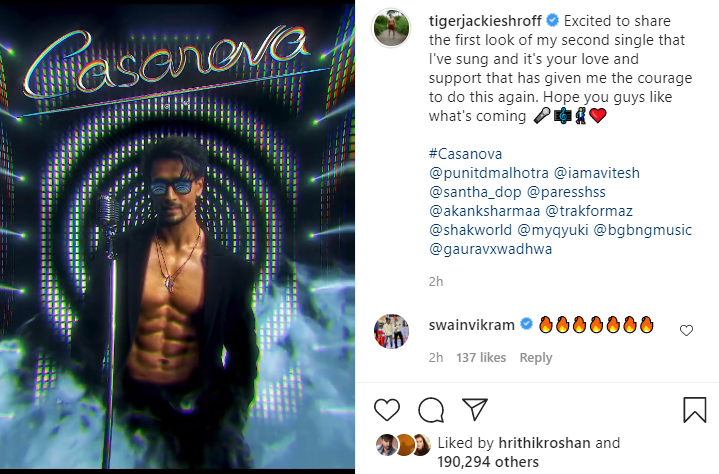 Shroff who is already prepping for his upcoming action drama film 'Ganapath' and working out hard to make a chiselled physique took the news to the micro-blogging site, and wrote, "Excited to share the first look of my second single that I've sung and it's your love and support that has given me the courage to do this again. Hope you guys like what's coming #Casanova," along with a red heart and dancing emoticon.

Celebrity followers including Hrithik Roshan and more than one lakh fans liked the post within a few minutes of being posted. Rumoured girlfriend and actor Disha Patani also reshared the clip on her Instagram story to show her excitement on the same.

Of the late, Tiger Shroff has returned from his Maldives vacations with her partner Disha Patani and after winning over everyone with his action-packed performance in 'Baaghi 3' the actor is all set to be seen in 'Heropanti 2'. (ANI)