Rahul Gandhi had tweeted on Monday that Congress party will be holding several memorial events across the country this week to mark his father's birth anniversary.

"This week we will celebrate my father, Rajiv Gandhi Ji's 75th birth anniversary with memorial events across India. To honour him, each day this week, I will draw attention to one of his many incredible achievements. Today, the Information Technology revolution," Rahul tweeted along with a video.

In the first video, the Gandhi scion shared how seeds of IT revolution in the country were sown in 1985 under Rajiv Gandhi's leadership.

Some of the steps taken by the Rajiv government as shown in the video include -- "Computers become the symbol of ambitious Indians, entrepreneurs like NR Narayana Murthy, Shiv Nadar and Azim Premji set-up world-class IT companies, through MTNL Indians could connect to 243 overseas countries, digitised telephone exchanges, PCOs introduced to connect rural and urban India and first Indian Railways introduced Digital reservation for tickets." 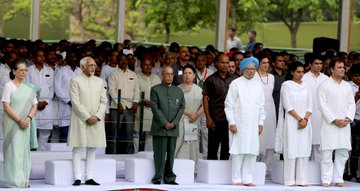 Congress general secretary KC Venugopal has directed party functionaries to observe the day at the state, district and block levels with the involvement of the general public at large. He has also instructed the leaders that apart from the prayer meetings and floral tributes, social programmes such as blood donation camps, plantation of saplings, seminars, conferences can be held.

Rajiv Gandhi became the youngest prime minister of the country at age 40. He took over as the sixth Prime Minister after his mother Indira Gandhi's assassination in 1984. In May 1991, Rajiv Gandhi was assassinated by a Liberation Tigers of Tamil Eelam (LTTE) suicide bomber during an election rally in Sriperumbudur in Tamil Nadu. His death anniversary is also observed as Anti-Terrorism day.(ANI)

Our aim is to make evidence-based policy-making integral part of governance by 2022: PM Modi