Rajasthan Royals pacer Varun Aaron credited his county stint for his improvement as a bowler, following the team's three-wicket win over Kolkata Knight Riders in the IPL.

Kolkata: Rajasthan Royals pacer Varun Aaron credited his county stint for his improvement as a bowler, following the team's three-wicket win over Kolkata Knight Riders in the IPL here.

In an excellent new-ball spell of 3-1-10-2, Aaron removed both the Kolkata Knight Riders openers -- Chris Lynn (0) and Shubman Gill (14) -- with inswinging deliveries.

"I've always bowled inswing but it's coming off a lot better after my county stint," said Aaron, who was not bought by any team for IPL 2018 and went on to play county cricket with Leicestershire, on Thursday. 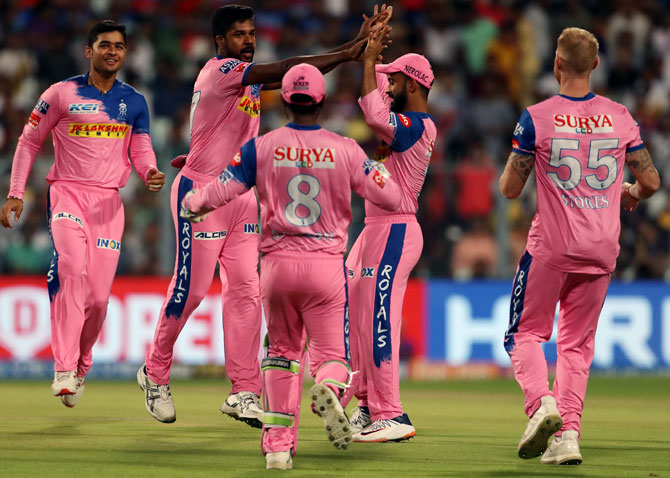 Aaron took full advantage of the Eden greentop and delivered a beauty to clean up Gill with a knuckle-ball that sharply cut back in.

Also Read: Jos Buttler 'not sure' if Dhoni 'did the right thing' by barging into the field

"I used to rely on my outswing a lot before. But last year when I was not playing the IPL, I played county cricket and did work on my inswing which is really handy because on wickets like these you can't get give much of room. So there's no point bowling outswing at my pace," the 29-year-old said.

Aaron said he would be returning to county cricket.

"I'm looking forward to going and playing in county cricket after the IPL because I've some time. I really enjoyed my time last year. I don't really know which team will need a fast bowler since I'm going to join mid-season. It all depends on availability of the current players and their fitness and form."

All-praise for the Eden wicket, Aaron said it was a very good cricketing surface. (With PTI inputs)