The landfall process of very severe cyclonic storm YAAS has commenced at 9 AM on the north of Dhamra and south of the Balasore coast in Odisha.

Bhubaneswar: The landfall process of very severe cyclonic storm YAAS has commenced at 9 AM on the north of Dhamra and south of the Balasore coast in Odisha.

IMD DG Mrutuanjay Mohapatra confirmed that the landfall of the very severe cyclonic storm has already started and would continue for three to four hours.

The cyclone YAAS would hit the landmass somewhere near Remuna Sadar block close to Bahanaga coast between the north of Dhamra and south of Balasore.

Mohapatra said the wind velocity at present is 130 to 140 kmph which would further likely increase to 150 kmph. 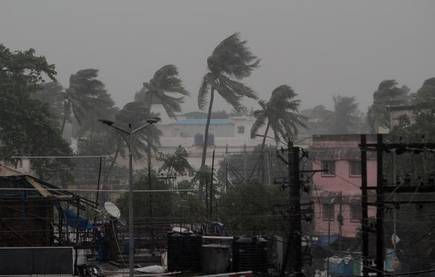 He said the impact of the cyclone YAAS would be severe in Balasore and Bhadrak district and there would be extensive damages to the properties.

Taking to Twitter Special Relief Commissioner P K Jena also said the landfall process of cyclone YAAS has started and would continue for another three hours.

He said the landfall process would be completed by 1 PM. The cyclone YAAS would proceed to Mayurbhanj where the wind speed would increase to 130 kmph.

The cyclone YAAS, would then move to Keonjhar and proceed to Jharkhand.

Jena said heavy rains reported in the entire north Odisha and maximum rainfall of 304 mm was reported in Baripada. He said several blocks in Balasore, Bhadrak Mayurbhanj, Kendrapara and Jagatsinghpur districts have reported rainfall between 110 mm to 300 mm.

The SRC said about 5.80 lakh people have been evacuated from ten coastal districts to safer places and cyclone shelters.

The state government has already deployed 52 NDRF teams, 60 ODRAF teams, 206 Fire Services teams and about 400 Response teams in the rescue and relief operation in the areas likely to be affected by the Cyclone YAAS.

Over 4000 workforce have been deployed in the relief and rescue operation in the state.

IMD DG M Mohapatra today appealed to the people of coastal Odisha, more particularly Balasore and Bhadrak districts not to move out of their houses and cyclone shelters till the department declared the cyclone YAAS out of danger.

Meanwhile, the flight operation in the Biju Patnaik International Airport was suspended today due to the cyclone YAAS.

The IMD DG said the sea condition will continue to be rough today and the situation will improve only after tomorrow.(UNI)

Cyclone Yaas: West Bengal fishermen advised not to venture into sea from May 23

Cyclone Yaas likely to intensify into a ‘Very Severe Cyclonic Storm’ on May 25 morning: IMD

Cyclone Yaas likely to make landfall on May 26 morning