Prime Minister Narendra Modi on Thursday said every person, who ridiculed and stood against of the decision of abrogation of Article 370 in Jammu and Kashmir, will be discussed in future along with their remarks.

Pali: Prime Minister Narendra Modi on Thursday said every person, who ridiculed and stood against of the decision of abrogation of Article 370 in Jammu and Kashmir, will be discussed in future along with their remarks.

Addressing an election rally here, the Prime Minister asserted that the Centre's decision to scrap Article 370 was for the country and not for politics.

"I want to remind the entire country from Beed that whenever Article 370 is discussed in the future, every person who has made fun of the decision, who has stood against and challenged it, will be discussed along with their remarks," the Prime Minister said.

He continued, "On the decision to remove Article 370, while one said it is like 'killing someone', another stated that it is the 'darkest day of Indian politics'. This is the language of our opponents but I want to tell them whatever we do, we do for the country and not for politics."

Highlighting the internal conflict within the Congress, he said that most of the Congress party leaders are engaged in dealing with the infighting within the party. "The young leaders who were in his (Rahul Gandhi) yantra (control) are also leaving together and the senior leaders are frustrated today," he said. 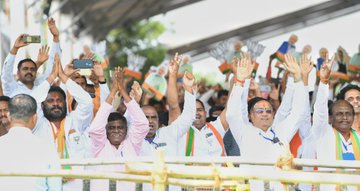 Drawing a comparison between the BJP and Congress-NCP alliance in poll-bound Maharashtra, he said, "On one hand, there is the work ethic of the current government and on the other, there is the selfishness of the Congress and Nationalist Congress Party (NCP) leaders."

Stating that leaders of the opposition party are worried why BJP workers are working so hard, Modi said, "Let me tell them today from Beed that, BJP has hardworking workers, who first win people's heart and then elections."

Meanwhile, the Prime Minister also asserted that the Congress will be punished by voters for their misdoings, fake remarks and corruption.

Also Read: Congress attitude negative, BJP will do what is in counts interest: PM Modi

Hailing the governance of BJP government in the state, he said, "The government sent instant relief when the situation got difficult due to drought. From disaster relief to crop insurances, we have supplied support of all kinds. Today, every farmer is getting direct benefit into his account under the Pradhan Mantri Kisan Samman Nidhi Yojana."<br>Modi said that ever since the BJP government has stopped the practice of middlemen, Rs 8.5 lakh crore has been transferred to the bank accounts of the needy in the entire country and Maharashtra received Rs 42,000 crore. 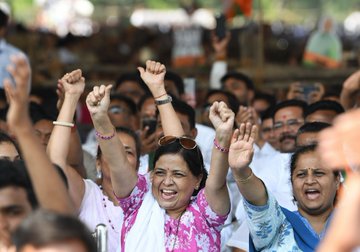 The Prime Minister expressed happiness over proper railway connectivity, water and electricity supply being provided to the people of Beed. He said that the right environment is being created for the industries in Beed.

Maharashtra will go to polls on October 21 and counting of votes will take place on October 24. (ANI)