Rahul Gandhi: Will waive farmer loans within 10 days of coming to power

Rahul said, "Narendra Modi Ji can forgive Rs 2.5 lakh Cr of the rich, but cannot waive a single rupee for the farmers of the nation. We waived off farmer loans in Karnataka worth Rs 8000 Cr, Modi Ji did not do anything for the state's farmers."

Kalgi: Congress President Rahul Gandhi, on Saturday, claimed that within ten days of the Congress party coming to power in the 2019 General Elections, all farmer loans nationwide will be waived off.

While addressing a public rally in Kalgi ahead of the impending Karnataka Assembly Elections, Gandhi said, "When the Congress comes to power in 2019, we will waive the loans of farmers within 10 days of coming to power. We have also planned food processing plants for the benefit and growth of Karnataka farmers."

Alleging that Prime Minister Narendra Modi does not come to the aid of farmers, he said, "Narendra Modi Ji can forgive Rs 2.5 lakh Cr of the rich, but cannot waive a single rupee for the farmers of the nation. We waived off farmer loans in Karnataka worth Rs 8000 Cr, Modi Ji did not do anything for the state's farmers."

Accusing the current BJP Government of corruption, Gandhi suggested that Modi saves money on the Petrol taxes and channels it to a few Ministers in his ranks.

"Modi Ji saves money from Petrol and gives it to 5-10 Industrialist Ministers. Even Amit Shah (BJP President) admitted that Yeddyurappa is the most corrupt Chief Minister, does Modi Ji want that the Reddy brothers and Yeddyurappa loot Karnataka's, money?" he said.

"His minister Piyush Goyal has not revealed to the nation that he owns a company, he keeps it hidden and earns crores of rupees from it, and Modi Ji is silent on the matter," he added on the corruption note. 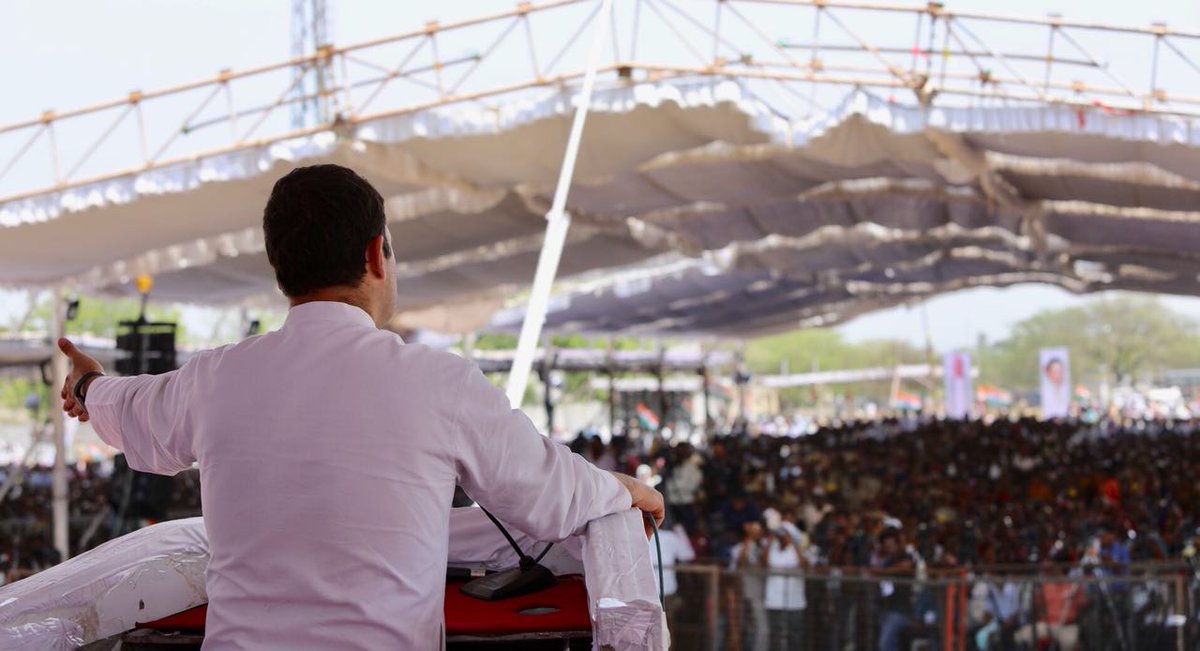 Gandhi also highlighted BJP president Amit Shah's son, Jay Shah's firm making a mind-boggling 16,000 percent increase in profits the year following election of PM Narendra Modi, saying, "Businesses across the nation are facing hardships, while Amit Shah's son turns 50,000 into 8 Cr! This is an outright theft, though Modi Ji has maintained his silence on the matter."

Claiming that the Congress government in the state has delivered on its promises via various welfare schemes, he said that even the Prime Minister has acknowledged the state's better employment record.

"Even PM Modi has acknowledged Karnataka's better employment record. We would further improve this record by increasing women employment. The BJP opposed the amendment to Article 371 (J), while the Congress actively pursued it to open up growth opportunities for the people."

Claiming that the BJP-RSS is assaulting Dalits across the nation, he said, "Half the money that the Indian (BJP) Government gives to the Dalits and tribal people, the Congress gives in Karnataka alone."

"The people of BJP want the RSS to run Karnataka. They want to crush your language, history, culture and food," he added. (ANI)

Rahul Gandhi: Too many leaks, the 'chowkidar' is weak