Shahjahanpur rape case: Swami Chinmayanand to be produced before court through video conferencing

Shahjahanpur: Detained former BJP MP Swami Chinmayanand, who is accused of raping a law student, will be produced before the district court here on Thursday.

The BJP leader was supposed to be present in the court on October 1 but due to his late discharge from the Sanjay Gandhi Post Graduate Institute of Medical Sciences (SGPGI) hospital, the date of hearing was postponed for today. Chinmayanand will appear before the judicature through video conferencing. 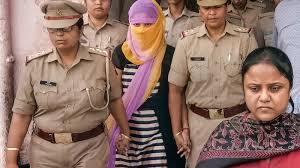 Former Union Minister Swami Chinmayanand was sent to Shahjahanpur jail after being discharged from SGPGI hospital, Lucknow on October 1. A court on Monday dismissed the bail pleas of Chinmayanand and the law student who had accused him of rape. District Court Judge Ram Babu Sharma had reserved the order in the matter after hearing arguments from both sides.

Priyanka Gandhi Vadra: BJP govt in UP has nothing to do with women security at all