Watch: This is how Udaipur murderers were caught

The two men, who beheaded a tailor on camera in Rajasthan's Udaipur and which rocked the nation, had tried to flee the city on a motorcycle.

Udaipur: The two men, who beheaded a tailor on camera in Rajasthan's Udaipur and which rocked the nation, had tried to flee the city on a motorcycle.

The accused Riyaz Akhtari and Ghouse Mohammad sped a motorcycle on the highway on the outskirts of Udaipur concealing their face with helmets. However, the duo were intercepted by police. 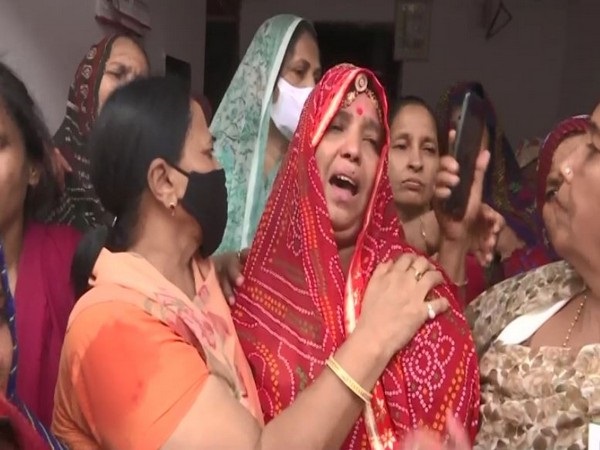 The beheading of tailor Kanhaiya Lal in Udaipur by two men for allegedly posting content in support of suspended Bharatiya Janata Party (BJP) leader Nupur Sharma, had sparked public outrage across the country.

Kanhaiya Lal was cremated on Wednesday in Udaipur in the presence of a large number of people who raised slogans demanding capital punishment for the accused. His last rites were performed amidst heavy police security.

"Kanhaiya Lal had returned to his shop after many days as he was receiving death threats. For the last 10-15 days, he was getting life threats. They said that they will kill him. People used to come both at home and his shop to threaten him. He was threatened over the phone as well," she recalled how her husband was getting death threats.

Earlier on Tuesday, just a few hours after he reopened his shop, two men arrived posing as customers. He started measuring one of them and suddenly, he was attacked with a giant cleaver while the other man recorded the gruesome incident.

Notably, Kanhaiya had also filed a complaint with the police about threats. A relative of the deceased demanded capital punishment for the murderers saying, "The accused should get punished, otherwise these people will get encouraged to commit more such crimes. The accused should be given such a punishment that no one dares to commit such an incident again."

"We want that either their (murderers) encounter should happen or they should be hanged to death. It is needed to instil fear in them," said Kanhaiya Lal's son.

The two men seen in the video hacking the tailor, were arrested last night. The National Investigation Agency (NIA) on Wednesday took over the investigation of the brutal murder of a tailor Kanhaiya Lal in Rajasthan's Udaipur who was hacked to death inside his shop by two men in broad daylight a day ago, officials said.

The move comes soon after the Ministry of Home Affairs directed the NIA to take over the investigation of the case that shocked people across the country.

A four-member NIA team under the supervision of an Inspector General and a Deputy Inspector General (DIG)-rank officers have already taken details of the incident after reaching Udaipur last night. The NIA team has started investigating from all possible angles.

The two accused were arrested within hours of the incident. The assailants identified themselves in the video as Riyaz Akhtari and Ghouse Mohammad. In the video, Riyaz was seen attacking 47-year-old Kanhaiya Lal with a sharp-edged weapon while the other, Ghouse, recorded the crime on his mobile phone.

The victim reportedly had recently shared a social media post in support of Nupur Sharma-- former BJP spokesperson who had made controversial remarks against Prophet Mohammad.

Riyaz and Ghouse, both residents of Udaipur, were arrested from Bhim in the Rajsamand district. Following the murder, local markets in the area were shut as the traders demanded justice for the victim.

Internet services are suspended in Udaipur and a curfew has been imposed. A statewide alert has also been issued to all SPs and IGs to increase the mobility of forces and to maintain officers on the ground. (ANI)