A research team witnessed the presence of a candy cane-like structure at the centre of the Milky Way galaxy days before Christmas festival. Images from the National Aeronautics and Space Administration (NASA) revealed the presence.

Maryland: A research team witnessed the presence of a candy cane-like structure at the centre of the Milky Way galaxy days before Christmas festival. Images from the National Aeronautics and Space Administration (NASA) revealed the presence.

The image captured by Goddard-IRAM Superconducting 2-Millimeter Observer, or GISMO which is an instrument built by NASA shows the inner part of the galaxy.The galaxy hosts the densest and largest collection of molecular clouds in the Milky Way and these clouds hold dense dust and gas which are responsible for forming millions of stars like the Sun. Papers describing the image written by Johannes Staguhn and Richard Arendt were published in the Astrophysical Journal.

"The galactic centre is an enigmatic region with extreme conditions where velocities are higher and objects frequently collide with each other," said Staguhn. 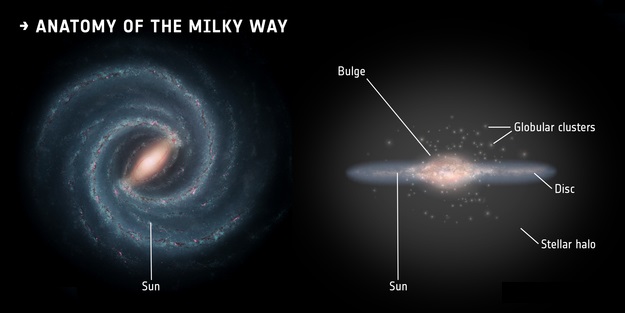 "GISMO gives us the opportunity to observe microwaves with a wavelength of 2 millimetres at a large scale, combined with an angular resolution that perfectly matches the size of galactic centre features we are interested in. Such detailed, large-scale observations have never been done before," Staguhn added.

The study discusses that after collecting the data from the sky for eight hours GISMO detected the most prominent radio filament present in the galactic centre and makes this the shortest wavelength where such curios structures have been observed.According to the scientists, filaments delineate the edges of a large bubble produced by some energetic event at the galactic centre.

"We are very intrigued by the beauty of this image; it's exotic. When you look at it, you feel like you're looking at some really special forces of nature in the universe," said Staguhn.

The images captured are composed of different color codes for the emission mechanisms. (ANI)