American Dalilah Muhammad on Sunday (local time) broke the world 400m hurdles record on the final day of the US Championships.

Lowa: American Dalilah Muhammad on Sunday (local time) broke the world 400m hurdles record on the final day of the US Championships. She clocked 52.20 seconds as she finished the race on the final day of action in Des Moines in Lowa, USA. She was 0.14 seconds faster than the previous record set in 2003 by Russian Yuliya Pechonkina. 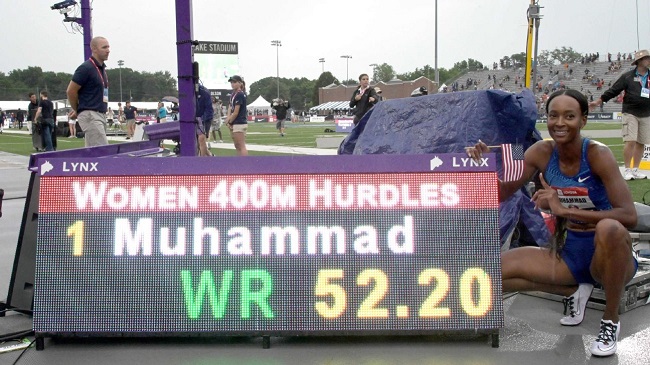 "Unfazed by the rain, Muhammad had a clear lead as she entered the final straight with Little, McLaughlin and Ashley Spencer locked in a battle for the runner-up spots. There was no catching Muhammad, though, as she charged through the line in 52.20, taking 0.14 off the previous world record set in 2003 by Yuliya Pechonkina," the IAAF said in an official statement."McLaughlin finished second in 52.88, just 0.13 shy of her lifetime best, with Spencer finishing strongly to take third place in 53.11, equalling her PB," the statement added."WORLD RECORD!! 52.20 from Dalilah Muhammad to win the 400m hurdles at the US Championships. (pending ratification)," IAAF tweeted.

However, Dalilah's record is pending as the record will be confirmed only after the ratification procedures, the IAAF added. (ANI)