Dakshina Kannada SP Rishikesh Sonawane said that their bodies were recovered on Monday. The landslide was reported due to heavy rainfall in the state. Full story on Dynamite News:

Dakshina Kannada: Two minors lost their lives after their house collapsed following a landslide in the Parvathamukhi village in Dakshina Kannada district.

Dakshina Kannada SP Rishikesh Sonawane said that their bodies were recovered on Monday. The landslide was reported due to heavy rainfall in the state.

"The bodies of two minor girls were recovered by NDMF and SDMF personnel," SP Rishikesh Sonawane.

Earlier on July 7, three people died after a landslide in the DK district. 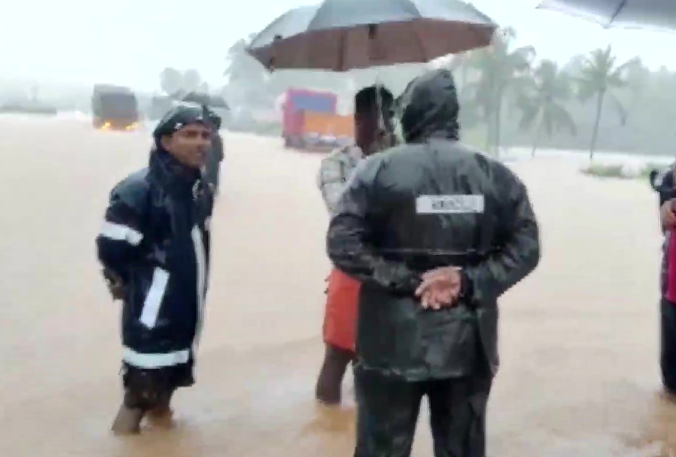 Due to heavy rainfall, severe water-logging, inundatiion on parts of a highway, agricultural fields and low-lying areas, life has been disturbed across the state. Bhatkal town in Uttara Kannada district has also been affected badly for the last two weeks.

Indian Meteorological Department has issued a 'heavy rains' alert for the coastal Karnataka region and north Interior Karnataka till August 6. The IMD on Sunday in its weather forecast issued an orange alert for August 2 for the districts of Kodagu, Hassan, Chikmagalur, and Shimoga.

In a detailed weather update, the department today said that fairly widespread to heavy rainfall with thunderstorms and lightning was very likely over coastal and north interior Karnataka from 2-4 August.

According to the district administration, which declared a holiday for all schools, anganwadis, and colleges in Sullia and Kadaba taluks on Tuesday, the situation was pretty bad in many villages of the two taluks. (ANI)

Weather Alert: Monsoon onset over Kerala on this date