Prime Minister assured that India will stand shoulder to shoulder for Nepal as he said, "Bharat will work as Sherpa in the journey of Nepal." He also gave a slogan to mark the bilateral friendship between the countries as "Nepal-Bharat Maitri Amar raho."

Kathmandu: Prime Minister Narendra Modi was accorded a civic reception at the Rashtriya Sabha Griha where he highlighted the 'Neighbourhood Comes First' and hailed the Indo-Nepal friendship ties.

While addressing the civic reception accorded to him by Nepal's government, Prime Minister said that India will always support Nepal in all circumstances.

Prime Minister assured that India will stand shoulder to shoulder for Nepal as he said, "Bharat will work as Sherpa in the journey of Nepal." He also gave a slogan to mark the bilateral friendship between the countries as "Nepal-Bharat Maitri Amar raho."

He further highlighted the people-to-people ties being shared by the citizens of India and Nepal.

He further stressed that India is supporting the on-going project to connect Kathmandu to India via railways.

While underlining the cultural significance of Nepal's capital, Prime Minister Modi said, " Kathmandu is just not the birthplace of Lord Buddha, or the state having the Mount Everest but it is in itself an entire world."

"There is something unique about the beauty of Kathmandu. It is a mixture of the ancient and the modern. This city showcases the culture of Nepal. Kathmandu is a special city. It has an important place in the history of the world." Prime Minister Modi added.

He highlighted the fact that Nepal is also connected with India in the field of sports as he said, " Nepal is now connected to the Indian Premier League (IPL). Nepal's Sandeep Lamichhane is participating in IPL." 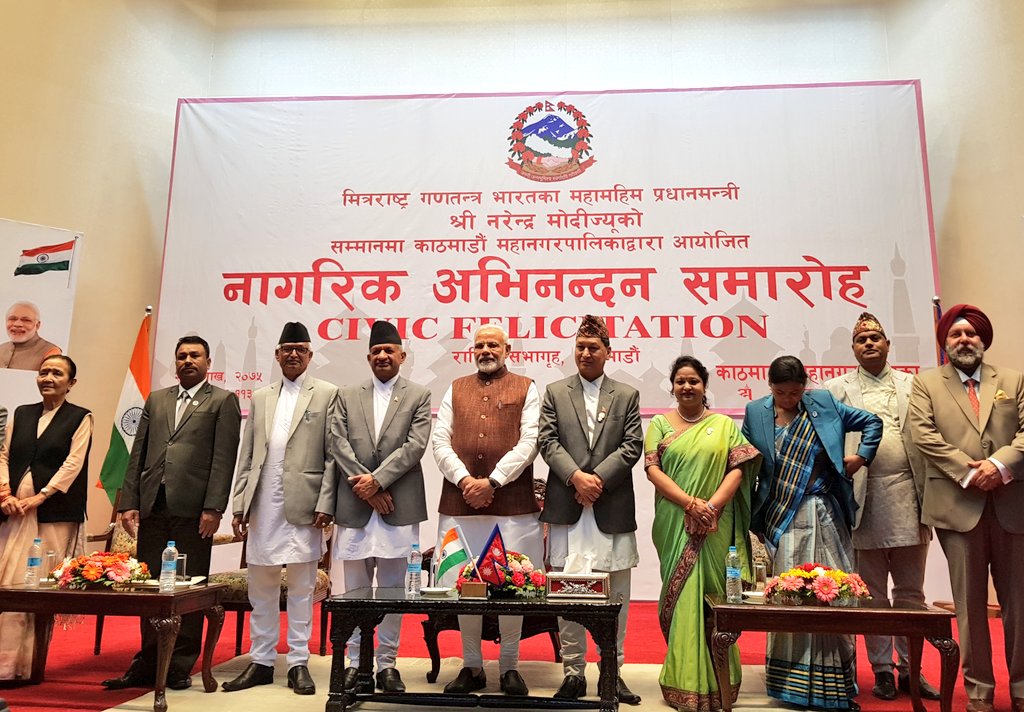 Lamichhane is currently playing for the Delhi Daredevils team in IPL.

Prime Minister then reiterated the slogan "Sabka Saath, Sabka Vikaas" and said that India and Nepal will work together for each other's development.

He also talked of the International Solar Alliance which was conducted on March 11.

"India has taken the lead in mitigating the menace of climate change. The International Solar Alliance has brought together nations from across the world." Prime Minister Modi said

The Prime Minister again appreciated the decision of Nepal to adopt democracy and said, " I salute Nepal's spirit of resilience and commitment towards democracy."

He also talked of his previous visit to Pashupatinath temple in Nepal and said, "This time, in addition to Pashupatinath, I went to Janakpur and Muktinath. These places illustrate close ties between our nations."

He also expressed gratitude towards the municipality to organise his two-day stay in Nepal.

Prime minister Modi will now depart for India from the Tribhuvan International Airport in Kathmandu after completing his two-day visit to Nepal. (ANI)