Lifelong excess weight almost doubles a woman's risk of developing womb cancer, according to recent research. The findings of the study were published in 'BMC Medicine'.

The study from the University of Bristol is one of the first to find that for every 5 extra BMI units, a woman's risk of womb (endometrial) cancer is almost doubled (an increase of 88 per cent).

This is higher than most previous studies have suggested and reflects lifelong weight status rather than a snapshot in time like most other studies. 5 BMI units is the difference between the overweight category and the obese category, or of a 5'5 adult woman being two stones heavier.

The international study looked at genetic samples from around 120,000 women from Australia, Belgium, Germany, Poland, Sweden, the UK, and the USA of which around 13,000 had womb cancer. This large statistical analysis is one of the first studies of its kind to look at the effect of lifelong greater BMI on womb cancer risk.

The researchers looked at markers of 14 traits, which could link obesity and womb cancer. They uncovered two hormones - fasting insulin and testosterone - which increased the risk of being diagnosed with womb cancer.

By pinpointing exactly how obesity increases the risk of cancer, such as through hormones, scientists in the future could use drugs to reduce or increase the level of these hormones in people already at a higher risk of cancer.

For example, drugs like metformin used in diabetes treatment can reduce the levels of hormones and research suggests this drug also affects cancer risk, though further study is ongoing.
Womb cancer is one of the cancer types most closely linked with obesity. 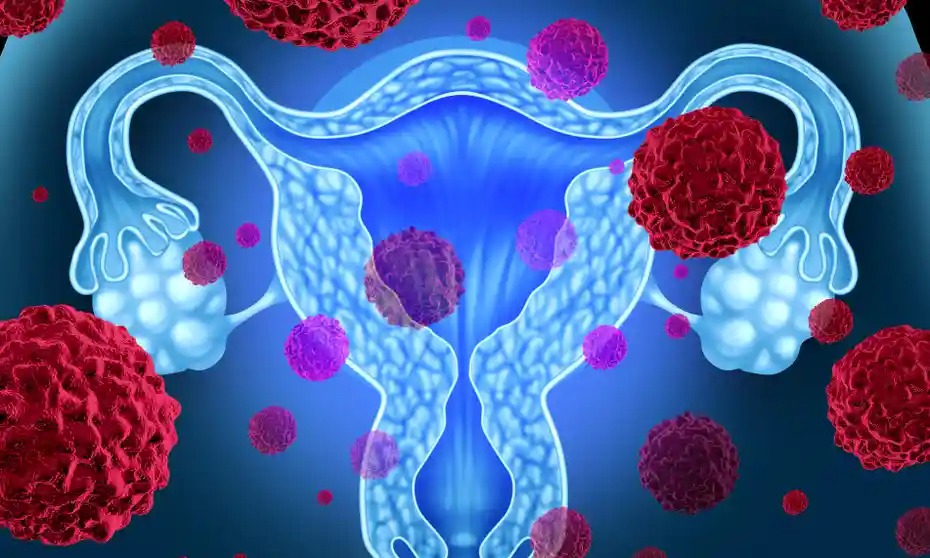 t's the most common gynaecological cancer in high-income countries and is the fourth most common cancer for women in the UK - 1 in 36 women will be diagnosed in their lifetime. And of UK womb cancer cases, it's estimated that around a third are caused by being overweight and obese.

Being overweight or obese is the second-highest preventable cause of cancer in the UK. It's estimated that more than one in 20 cancer cases in the UK are caused by excess weight.
Emma Hazelwood, lead author of the paper said, "This study is an interesting first step into how genetic analyses could be used to uncover exactly how obesity causes cancer, and what can be done to tackle it.

Links between obesity and womb cancer are well-known but this is one of the largest studies which has looked into exactly why that is on a molecular level. We look forward to furthering research exploring how we can now use this information to help reduce the risk of cancer in people struggling with obesity."

Dr Julie Sharp, head of health information at Cancer Research UK said, "Cancer Research UK has been leading the way in uncovering links between obesity and cancer for years. Studies like this bolster the fact that being overweight or obese is the second biggest cause of cancer in the UK and can help us start to pinpoint why. This will play a pivotal role in uncovering how to prevent and treat cancer in the future."

"More research is needed to investigate exactly which treatments and drugs could be used to manage cancer risk among people struggling with obesity. We already know that being overweight or obese increases your risk of developing 13 different types of cancer. To reduce your cancer risk, it's important to maintain a healthy weight by eating a balanced diet and staying active," Sharp added.
When Kath first started experiencing bleeding in 2013, she put it down to menopause.

Despite urges from her daughter to get checked out, she carried on doing the job she loved - working as a bra fitter in Debenhams Trafford. But just before Christmas in 2013, she had a heavy bleed which prompted her to make an appointment with the doctor.

In January 2014, Kath went to her GP and was referred to Royal Bolton Hospital where she had a biopsy. She was diagnosed with womb cancer.
"When you hear the word cancer your mind runs riot and I was thinking: 'Am I going to live to see my grandchildren grow up?'" Kath said.

"I felt sick as I didn't know what was going on. It was as though I was in a dream. I was devastated when I found out and cried with my husband holding my hand."
Thankfully, Kath's cancer was caught at the earliest possible stage, which meant she could have life-saving surgery which removed her ovaries and cervix.

The operation removed all cancer, which meant she didn't need radiotherapy or chemotherapy, and she is now cancer-free.But her journey did not end there. "After finishin

How to Protect from Coronavirus (COVID-19): Tips from an expert

Health: Women With Benign Breast Disease Are At Higher Risk Of Breast Cancer

At what age do women have the best sex of their lives?

Counseling for pregnant women gets personalized