Prabhu took to his Twitter handle to post a thread, "I tried to overcome decades of neglect through systemic reforms in all areas, leading to unprecedented investment and milestones."

New Delhi: Amidst Opposition's demand for his stepping down from the position of Union Railway Minister over derailment of the Puri-Haridwar Kalinga Utkal Express, Suresh Prabhu on Wednesday informed that though he takes moral responsibility of the incident, Prime Minister Narendra Modi asked him to wait.

Prabhu took to his Twitter handle to post a thread, where he says, "In less than three years as Minister, I have devoted my blood and sweat for the betterment of the Railways. Under the leadership of Prime Minister Narendra Modi, I tried to overcome decades of neglect through systemic reforms in all areas, leading to unprecedented investment and milestones."

"New India, envisioned by Prime Minister Modi, deserves Railways, which is efficient and modern. I promise that is the path on which Railways is progressing now," he further said.

Adding, "I am extremely pained by the unfortunate accidents, injuries to the passengers and loss of precious lives. It has caused me deep anguish. I met Hon'ble Prime Minister Narendra Modi, taking full moral responsibility. He has asked me to wait." 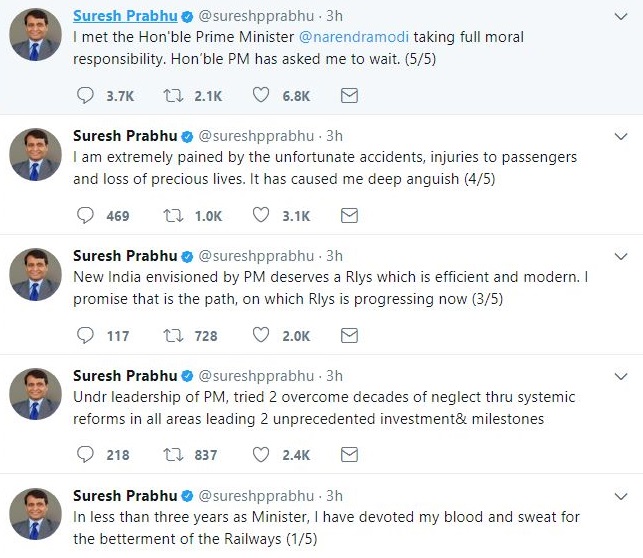 The Congress on Monday demanded Railway Minister Suresh Prabhu's resignation after the derailment of the Puri-Haridwar Kalinga Utkal Express, which claimed the lives of 23 people and left more than 100 injured, at Muzaffarnagar's Khatauli region on August 19 evening.
In a press conference held here, the Congress cited previous examples of ministers, who resigned after such tragedies and asked Prabhu to do the same.

"When a similar incident happened four decades ago, the then Railway Minister stepped down. When a flight crash landed in Delhi, the former civil aviation minister Late Madhavrao Scindia resigned. The government should take moral responsibility for the accident," Congress leader Manish Tiwari said.

He added that the incident points to gross negligence on the part of the government. (With ANI inputs)