Bangarmau Assembly seat in Unnao district, from where BJP MLA Kuldeep Singh Sengar was elected, has been declared vacant.

Lucknow: Bangarmau Assembly seat in Unnao district, from where BJP MLA Kuldeep Singh Sengar was elected, has been declared vacant.

The Uttar Pradesh Legislative Assembly Secretariat in a statement said, "The seat from where MLA Kuldeep Singh Sengar was elected from - Bangarmau of Unnao district, is declared vacant from December 20, 2019, onward."

Expelled BJP MLA Sengar, on December 16 last year, was found guilty by a Delhi court for raping a minor girl in Uttar Pradesh's Unnao district in 2017. 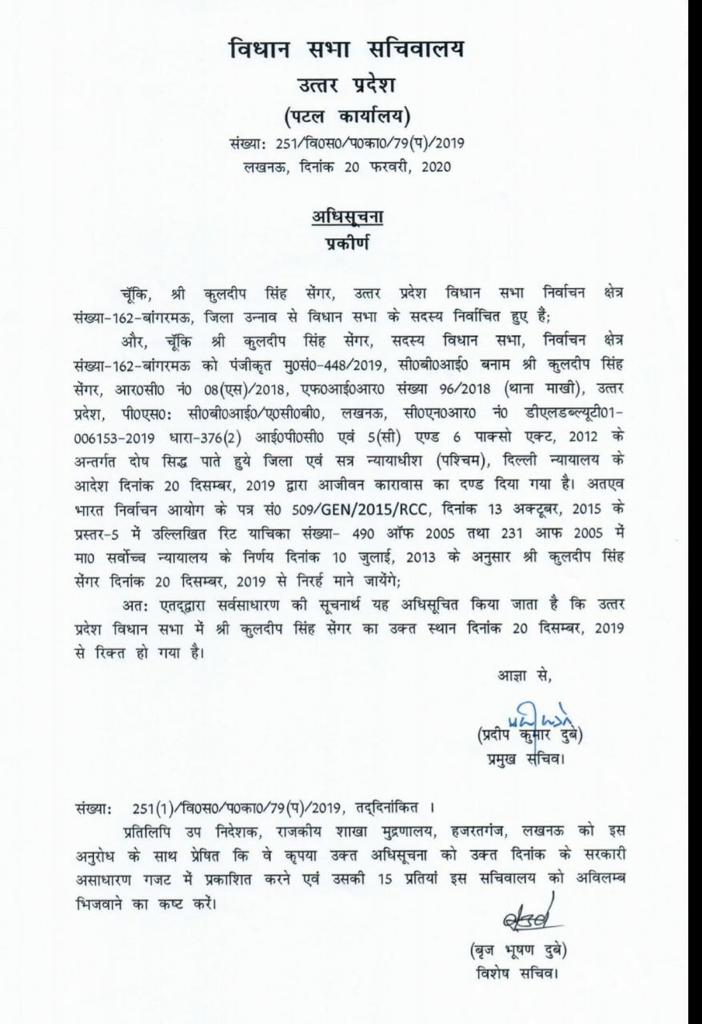 The court convicted him under Section 376 (rape) of the Indian Penal Code (IPC) and Section 5 (c) and 6 of the Protection of Children from Sexual Offences (POCSO) Act, which pertains to penetrative sexual assault committed against a child by a public servant.

It had awarded him the maximum punishment of life term with a rider that he will remain in jail for the "remainder of his natural biological life" and also imposed an exemplary fine of Rs 25 lakh. Sengar, a four-time BJP MLA from Uttar Pradesh's Bangarmau, had raped the girl at his residence in Unnao in June 2017, where she had gone seeking a job. (ANI)